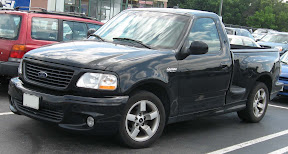 October auto sales were strong for Ford and GM, thanks to strong sales of vehicles like the F150. Image from Wikmedia Commons.

October was a banner month for GM and Ford sales. General Motors and Ford Motor Co. both posted large profits thanks to strong October auto sales. The adjusted sales rate for October was in the double digits, and domestic automakers are reaping huge benefits. The initial public offering for GM stock is inching closer still, and the company expects some appreciable results.

After a dismal September, October auto sales continued the trend of a resurgent auto industry. Auto sales fell in 2009 after the Cash For Clunkers program ended but have since begun to rebound. October sales of new cars posted a 13 percent gain over September, according to CNN, and the largest overall gains were realized by Ford and General Motors. GM posted a 4 percent sales gain for its core brands compared to last October. To date, General Motors has increased core brand sales by 22 percent so far this year. Ford, on the other hand, has posted a 15 percent gain overall since October 2009. Sales were driven especially by full size pickups. However, Ford sales are technically up 19 percent if figures for Volvo are discounted. Volvo was sold to Geely, a Chinese auto firm.

General Motors is already touting a GM stock offering as imminent. The company will likely put an initial public offering forward just before the Thanksgiving holiday, according to Automotive News. The IPO is tentatively set for Nov. 17, a week after GM is set to release its third quarter earnings. It is anticipated that GM profits should range between $1.9 and $2.1 billion, on a $34 billion quarter in total. The Treasury is said to be releasing a large amount of its shares in General Motors from the auto bailout.

Currently, nearly 61 percent of GM shares are held by the government, and the IPO might reduce that figure down to 43.3 percent. GM stock prices should be in the $23 to $29 range. It’s been a banner year for both firms, and end of the year sales should provide for an excellent 2011.