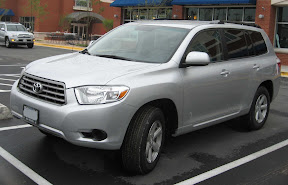 The Toyota Highlander is one of the models affected by the most recent Toyota recall. Image from Wikimedia Commons.

Another Toyota recall has been announced — or rather, three recalls at once. A recall by Toyota is starting to become a regular occurrence, and some are looking forward to when Toyota stops recalling cars. More than 1.5 million cars are affected. The first recall, of over 1.3 million vehicles concerns a possible defect in the braking system or the fuel pump. The second is for just over 130,000 cars that could have rusty brake drums.

Yet another Toyota recall

Toyota Motors has announced that they are recalling upwards of 1.53 million cars worldwide. There is a possible defect in the braking system. The models affected, according to ABC, are the Toyota Highlander, Avalon and the Lexus GS300, IS250 and IS350. The problem is a possible defect in the seal for the master brake cylinder. The master cylinder seal can potentially crack, which can lead to brake fluid leaking. The leak in brake fluid can lead to a warning light and a possible loss in brake pressure. There are 740,000 cars in the United States affected by the brake cylinder recall. No accidents have been reported as a result of the possible leak.

Toyota is also recalling 130,000 vehicles in China because of a defect in the rear wheel disk brakes, which can possibly rust. Besides the recall of the 740,000 cars in the United States, Toyota is also recalling almost 600,000 vehicles in Japan over possible defects in the fuel pump. The fuel pump can have a possible electric fault, which can cause the vehicle to stall. That defect is so far only thought to be in vehicles in Japan, according to the New York Times. The fuel pump problems are thought to be mostly confined to the Crown model, which is not sold in the U.S.

Toyota will be mailing out notifications to owners. The cars that are subject to the recall are from model years 2004 to 2006. This has not been a good year for Toyota. The car maker continues to be raked over the coals for recalls, though recalls by car makers are often preventative.