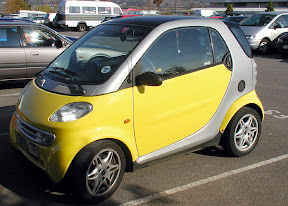 A new five-door Smart car with more seating is being made in partnership with Nissan. Image from Wikimedia Commons.

In order to boost sales, Nissan is building a new SmartCar model for sale in the United States. SmartCar has been struggling to sell more of the mini-cars built for city driving. One of the biggest customer complaints was a lack of seating. In order to boost appeal, SmartCar has paired with Nissan, who will build a five-door hatchback model. Economy cars are all the rage, and it will debut in 2011.

SmartCar began selling a subcompact car for city dwellers several years ago. The initial model, the Smart ForTwo, started to become successful when gas prices were at $4 a gallon, according to USA Today. The brand sold more than 24,000 vehicles its first year in the States. However, plunging economic conditions led to slow sales. Since then, the company has been struggling to move units. In order to appeal to more customers, the company will partner with Nissan to produce a five-door hatchback. The company that produces the Smart car, SmartUSA, is a subsidiary of Penske Automotive Group. The cars sold in the U.S. are manufactured by Daimler.

Part of the cause of lagging sales was customers wanted a car with more seating. Nissan will build the new subcompact using the V platform. It will be the basis for three different cars made in North American plants, according to Automotive News. The smallest car Nissan currently makes is the Versa, but the V platform will be smaller than the Versa, which will also switch to the new platform. The new Smart car model will be smaller than the subcompact Versa.

Part of the appeal of the Smart ForTwo is that the car is very economical. It doesn’t cost much to buy or to fill up. Compacts and subcompacts are starting to sell really well. The Ford Fiesta and many other models are becoming best sellers. It makes sense for more companies to break into that market.