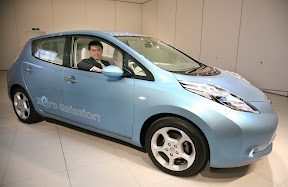 Nissan is taking orders for the Leaf from American customers again. Image from Wikimedia Commons.

Nissan has just announced that it will take reservations for the Leaf for customers who have had to wait to purchase one. The supply of available Leaf cars has dwindled to practically nil after the earthquake and tsunami badly disrupted the Japanese car industry. Now that production is resuming, customers can make a reservation for a Leaf starting May 1.

Customers line up for Leaf

The Nissan Motor Company has announced that it will resume taking orders for the all-electric Nissan Leaf from American customers, according to MSNBC. Last year, Nissan announced it would accept 20,000 reservations for the Leaf before it went on sale at dealerships in December. The reason for resuming the reservation program is that customers who had reserved the cars have been complaining of having to wait in order to purchase one. Nissan has delivered about 500 to customers who had made a reservation for the Leaf, and more than 5,300 Leafs have been sold worldwide. New shipments of Nissan Leaf cars are starting to arrive in the U.S., though the earthquake and tsunami that devastated Japan temporarily interrupted manufacturing.

The Leaf has also had its first problem since its December release, according to Fortune. A sensor that is located in the air conditioning system can cause a warning light to come on in the instrument panel. After the driver turns the car off, the malfunctioning sensor and instrumentation can prevent the car from starting again. Nissan is not announcing a recall, as there are fewer than 6,000 of the models on the road worldwide and fewer than 600 in the United States. The company will fix the defect for free and is currently in the process of making arrangements with owners.

The Nissan Leaf is the first of its kind and is a step toward zero-emission, zero-fuel use vehicles, but it does pose limitations. It costs $33,000, though a $7,500 tax credit can be claimed for buying an all electric vehicle. However, the range that the car is asserted to have varies by user. A CNN reviewer got about 50 miles of use before the car needed to be recharged, and the car is advertised to get up to 100 miles on a charge. Nissan does say that distance per charge does vary, so it isn’t an unforeseen outcome. Electric car technology will improve in time, but the car is still far from the worst choice for a daily commuter.