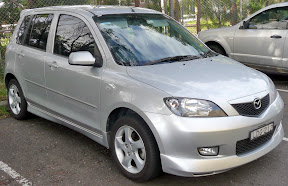 We may see a Mazda engine that puts a hybrid to shame. Image from Wikimedia Commons.

Recently, Mazda announced that the company is testing an engine that will get 70 miles per gallon. The Ford Motor Company had a similar announcement with plans for a 45 mpg engine in the Focus. Neither engine is attached to a hybrid car, but the engines do provide high efficiency within an internal combustion engine, though with improvements. The design uses advanced technology but some pretty basic principles.

There has been buzz over a prototype engine Mazda is testing, according to CNN. The prototype is designed to achieve 70 miles per gallon, or close to it. Fuel consumption that low will certainly be attractive, so long as the car is reasonably priced. The motor will use two different technologies: direct fuel injection and variable valve timing. Direct injection is when fuel is injected directly into the piston chamber instead of through a fuel injector on top of the block, for more precise ignition. Variable valve timing is where instead of mechanically set and unvarying valve operation, valves are automated via computer and adjusted into the most efficient rhythm. The technology is fairly cutting edge, but the idea is as basic at it gets.

Putting it in practice

Put simply, injecting gasoline in the right place at the right time will produce more force, and thus be more efficient, than traditional fuel injection. Other strategies, such as turbocharged smaller engines, increase efficiency as well. Hybrid cars are an engineering marvel, though the technology is still in its relative infancy. The traditional combustion engine is not a dead or dying technology, and it will be interesting to see what can still be done with it.