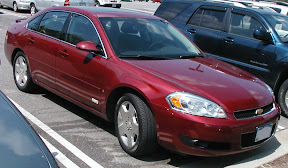 An Impala recall has been announced by GM, of 300,000 cars. Image from Wikimedia Commons.

General Motors has announced that the Impala recall, which is due to a seat belt defect, means more than 300,000 cars that will need to be repaired. There are only two affected model years of the Chevrolet Impala, according to USA Today. Owners of a Chevrolet Impala from the 2009 or 2010 model years should contact their nearest Chevrolet dealership or General Motors directly. The phone number owners can call to get information on the Impala recall is 800-630-2438. Dealerships and GM are going to be mailing out notices to owners of the cars in question. The repair to fix the defect is simple and will not cost owners of recalled cars a dime.

General Motors maintains an investigative division to catch these problems before anyone is hurt or killed. Thankfully, no injuries or deaths have occurred because of the seat belt defect, according to CNN. The defect in the Chevy Impala recall is in the mounting of the front seat belts. The problem is that the belts might not be properly anchored to the lap belt pretensioner. The danger is that in a crash, the belt can become separated from the mounting for the front passengers.

The reports began during warranty repairs of the seat belt, which General Motors investigated. There were nine claims by June of 2009, and by Aug. 2010, there were 32 complaints, which led to the recall being announced as a precaution. No reports were of injury or death. Owners should receive notifications for a needed inspection by the end of October.