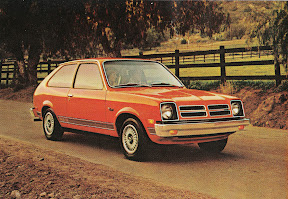 You can bet that any new Chevy subcompact will be a lot better than the old Chevette. Image from Wikimedia Commons.

Since the 1970s, domestic automakers have been looking for a way to supplant the competition in meeting the demand for fuel efficient subcompact cars. Honda and Toyota have held steady in offering small, fuel efficient cars that come with reasonable sticker prices. GM, Chrysler and Ford have been trying for ages to get larger shares of those sales. Later this year, the Chevy Cruze is going to be released for sale, and Ford will soon debut the new Focus. Both car makers seem to be poised for aggressive marketing of those models.

Though the marketing for Chevrolet in past years may give the impression that the company only wants to sell trucks and SUVs, nothing could be further from the truth. Currently, there are two models Chevrolet offers that for less than $15,000 and get more than 25 mpg, the Cobalt and Aveo. Both models have sedan editions. Later this year, Chevrolet is debuting the Cruze and also the Volt, but the Cruze is aimed right at the heart of Toyota and Honda. The Cruze, according to the New York Times, will get 26 mpg in the city and 36 highway for the standard model. The Cruze retails for $16,995.

Ford is in on the game, too

Ford currently offers the Fiesta, a subcompact that has been selling like hotcakes, which gets 29 miles per gallon in the city, and 40 mpg highway. The Focus, which is due a face lift for 2012, also gets 25 mpg. The Fiesta lists for $13,320 and the basic Focus retails for $16,640. That’s not much more than a Honda Civic or Toyota Corolla. Chrysler is also set to roll out a fuel efficient Fiat as a result of the merger of the two companies.

Chrysler, Ford and GM, “The Big Three,”  want to change the public’s perception. It is not that none of those companies have ever tried to sell a subcompact — far from it. However, all are going to get more aggressive about the new compact and economic cars that will be debuting soon.