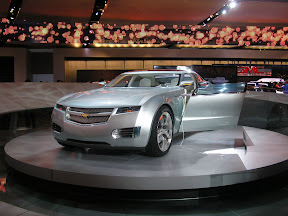 GM is expected to file an IPO in days, which bodes well for the release of the Chevy Volt. Image from Wikimedia Commons (CC GN by Jake N)

General Motors had a tumultuous last few years. After successive years of falling sales, GM had to ask for an auto bailout and file for bankruptcy. GM was placed under government conservatorship, and the terms of the bailout included that the government held a majority of shares. However, GM’s time in bankruptcy did some good. Recently, it was announced that CEO Ed Whitacre, Jr. would be retiring, and also the General Motors is days away from an Initial Public Offering.

Chairman and Chief Executive Officer of General Motors, Ed Whitacre Jr., has just announced that he will be retiring, according to the New York Times. He had formerly been the Chairman of AT&T. He will hand over his duties to former Nextel executive Daniel Akerson. He will step down as CEO in September and will cede Chairman duties to his successor at the beginning of 2011. Whitacre had planned on retiring as soon as General Motors had stabilized and was headed in the right direction. That certainly seems to be the case.

After filing for bankruptcy last year and turning over majority ownership to the governments of the United States and Canada, General Motors has posted a profit for the second consecutive quarter. According to USA Today, GM has just posted a profit of $1.3 billion. In the second quarter of 2009, GM had missed a huge debt payment. First quarter of 2010 saw profits of $865 million, according to CNN Money. This is a sure sign that things are looking up for the auto manufacturing giant, which had to divest itself of all but four main brands to survive – Buick, Cadillac, GMC and Chevrolet.

As General Motors was de-listed from stock exchanges, and roughly 60 percent of the shares are held by the U.S. government, the company will have to sell those shares to pay the Treasury back. GM Chief Financial Officer Chris Liddell hasn’t committed to a date, but it’s expected soon. The Initial Public Offering for the new, leaner and meaner General Motors might start the company at its highest ever stock price.