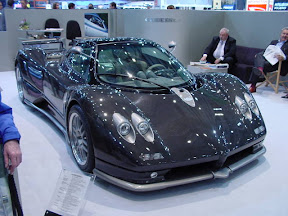 High gas prices won't cause supercars, like the Pagani Zonda (pictured), to go away anytime soon. Image from Wikimedia Commons.

Though most people have been feeling the pinch of high gas prices, supercar makers have hardly noticed. High performance green vehicles are becoming more available, but traditional high-end sports cars are still being made with complete disregard to the price at the pump. A person who can afford a Ferrari can still afford to fill it with fuel.

McLaren looks to take on Bugatti

McLaren, the race car company and boutique sports car maker, is starting to work on a new car that will debut in 2014, according to AutoWeek. The company that brought the world the F1, the fastest road car in the world for nearly a decade, is releasing its new car this year, the MP4-12C, but McLaren is not content to rest on its laurels. The next project for McLaren will be an as yet unnamed car that will feature a 5-liter engine that will produce nearly 800 horsepower. The car is projected to go from 0 to 200 miles per hour faster than the Bugatti Veyron, go from 0 to 60 in 2.8 seconds and cost more than $500,000.

General Motors, according to CNN, is adding about 250 new jobs to the rolls in order to develop a new Corvette and investing nearly $131 million in developing the new version of Chevrolet’s sports car. The new Corvette won’t be ready for release for a few years, but the new positions will open soon at the GM plant in Bowling Green, Ky., where the Corvette has been produced since 1981. There is no detailed information available about this new ‘Vette yet, and no release date has been set at this point. Chevrolet is rolling out a new Camaro for 2012, according to Popular Mechanics, called the ZL1 Camaro. The ZL1 will have the same 6.2L V-8 that comes in the Cadillac CTS-V, which produces more than 550 horsepower.

Though supercars are the kind of vehicles that don’t traditionally prioritize environmental considerations, that doesn’t mean performance car makers are completely unconcerned. McLaren is looking for hybrid car engineers to produce a “green” McLaren. Porsche, according to USA Today, is currently taking orders for the 918 Spyder, a plug-in hybrid supercar that will go from 0 to 60 in 3.1 seconds, tops out at 199 miles an hour and will drive three more miles on electric power alone than the upcoming plug-in Prius hybrid will. It will also get 78 miles per gallon. Ferrari unveiled a hybrid version of the 599 in 2010 and intends to have hybrid versions of all of its cars by 2015, according to the Daily Mail. The hybrid 599, the 599 HY-KERS, will do 200 miles an hour and get up to 25 miles per hour, though it still has a V-12. Lamborghini announced in 2009 it would have a hybrid out by 2015, according to Popular Science. Even the beasts with impressive firepower under the hood are going green.