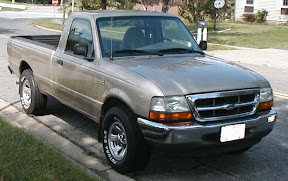 The Ford Ranger is being retired. Image from Wikimedia Commons.

After 2011, no new Ford Rangers will be made in the U.S. The light pickup made by Ford has remained basically unchanged for years. There was a reason for that, as the Ranger was usually the best selling light pickup on the market. Ford has decided to let the Ranger go, and the truck will no longer be made after 2011. The company is deciding to focus instead on the Ecoboost equipped F-150 as the option for a fuel efficient pickup.

Throughout the 1990s, the Ford Ranger was the best selling light pickup in North America. It was everything a person could want in a compact pickup. The Ranger was priced less than a full size truck and got about 20 miles to the gallon. The Ranger was capable of just about any task on or off road, and it was reliable. However, once comparable pickups by Toyota and Nissan were redesigned to have greater seating in the cab, sales began to slip. In 1999, according to Wikipedia, Ford sold more than 348,000 Rangers. However, by 2009, sales had dwindled to about 55,000.

End of an era

The obvious choice for Ford was either redesign it or make something new. But Ford went with another choice. The truck is getting redesigned for overseas markets, according to USA Today, but the new version won’t be available in the U.S. Instead, Ford is going to be pushing the new Ecoboost V-6 equipped F-150. However, the F-150 costs several thousand dollars more than the Ranger. Ford has not heavily pushed the Ranger recently, as most of the sales for the truck have been for fleet applications.

In addition to closing the book in the U.S. on a formerly very popular truck, Ford is also closing the plant that made it. The Ranger is made at the plant in St. Paul, Minn., and because the vehicle is in the firing line, the plant is as well. Ford attempted to revive the model with a crew cab but found it sold better under a different name. That model still exists as the Explorer Sport Trac.