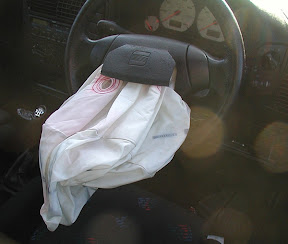 Ford has announced a recall of 144,000 F-150 trucks because of a malfunction in the airbag system. Image from Wikimedia Commons.

The Ford Motor Company has announced a recall of more than 140,000 F-15o trucks because of an airbag defect in the 2004 and 2005 F-150 models. This is the second recall of the most popular vehicle in the United States in the past six weeks. The newest recall concerns faulty wires that can cause the airbag to deploy upon ignition.

The Ford Motor Co. has announced that it is recalling approximately 144,000 F-150 pickups made between November, 2004, and June 2005 because of a problem with the driver side airbag, according to CNN. The problem relates to a potentially faulty wire. The insulation covering the wire to the airbag located in the steering wheel can rub off, and the airbag wire can short circuit a few seconds after ignition. This can cause deployment of the airbag. Ford has so far noted 269 incidents of accidental airbag deployment, and the company is recalling up to 144,000 of the pickups, but federal regulators want Ford to recall more than that.

Regulators call for 1.3 million trucks to be recalled

The National Highway Traffic Safety Administration is asking Ford to recall 1.3 million F-150s manufactured between 2004 and 2005. Ford is hesitating because most of the trucks that were involved in the inadvertent deployment of airbags were made at the Ford plant in Norfolk, Va. Not all of the trucks that had incidents were made in Norfolk, and that fact is causing the NHTSA to consider forcing Ford to recall all of the 1.3 million F-150s that the NHTSA is requesting.

Second Ford recall in as many months