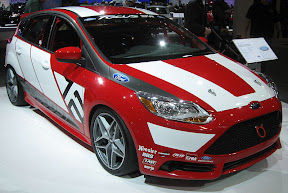 Ford has gotten around to releasing a new Focus ST, a sports model of the popular Focus compact. Image from Wikimedia Commons.

The brass at Ford think that the U.S. is finally ready for the Ford Focus ST, which is currently in testing across the world. The Focus ST is a performance version of the popular Ford Focus, which has been absent from the American market for years. The ST is slated to hit dealerships in 2012.

A performance version of the Ford Focus, the Focus ST, is currently undergoing worldwide testing to stoke demand for the car before it debuts in late 2011, according to USA Today. The car will pack significantly more horsepower and a better suspension than the base model. Ford has dispatched about 60 prototypes to various areas, including a few in the U.S., to undergo testing and to promote awareness of the new car. Photos show leopard-like black spots over silver, so if people see an odd-colored, super fast Focus that sits a little lower to the ground and corners like crazy, it just might be the new Focus ST.

The new Focus ST has the same engine as the rest of the Focus lineup. The Focus SVT, the previous performance model, was sold in the U.S. until 2004. It had a 2.7 liter, five-cylinder engine that put out 227 horsepower, according to MotorTrend. The new Focus ST has the same 2.0 liter inline four cylinder that other Focus models have, but the ST will have the turbocharged, direct-injected Ecoboost version. The ST is rated to generate a tooth-rattling 246 horsepower and 250 foot-pounds of torque. The car will also have Ford’s Electric Power Assist Steering and racing suspension. There isn’t a price tag yet, but it is expected to be in the upper range for Focus models. The most expensive Focus, according to the Ford website, is the Titanium package, which costs just less than $23,000.

Though this ST model is new to the United States, this isn’t the first performance Focus that Ford has made. The ST is a hot hatchback, or hot hatch, a performance-oriented compact car, a very popular type of car in European markets. Ford, according to Wikipedia, has sold the Focus ST in Europe and Australia since 2005 with a turbocharged, 2.5-liter, inline five cylinder. Ford is re-launching the Focus as an international model, and the new ST will hit international markets as well. The new Focus on sale in London is the same car for sale in Melbourne and Los Angeles. The Ford Focus sells well in America, but the British have taken to it like a duck to water. The car has been one of the best selling cars in the U.K. for the past decade and, according to Top Gear, was the third-best selling car in Britain in 2010. The Ford Fiesta was number one.