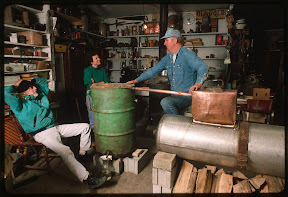 Automakers are not happy about adding more moonshine to gasoline in E15 blend. Image from Wikimedia Commons.

The government has just given its approval for a greater amount of ethanol fuel to be added to gasoline. Previously, approved mixture was 10 percent ethanol to 90 percent gasoline, called E10. The Environmental Protection Agency has approved the use of a 15 percent ethanol blend, E15, for vehicles from the 2007 model year and newer. The decision has created controversy, as automakers and others do not believe it is in the best interest of consumers.

The Obama administration and the Bush administration have pushed initiatives toward making the transportation industry in America more “green.” To that end, CAFE standards have been raised, and the EPA began looking into the pros and cons of E15. The EPA recently approved the E15 ethanol blend of fuel for sale, according to USA Today. However, only cars from model year 2007 and later are approved to use E15. The EPA may have a ruling for vehicles as old as the 2001 model year in coming months.

Automakers resist use of E15

Automakers and other interested parties are loudly opposed to E15 being implemented nationwide. President George W. Bush insisted that fuel producers should include at least 36 billion gallons of biofuel in the national fuel supply by 2022. Automakers are concerned about the effects of E15 on older vehicles, and also on smaller engines. Boat, motorcycle, lawnmower and heavy machine engines have different injection systems than cars, and thus won’t run as well on E15 fuel. Also, ethanol can be fairly corrosive, according to Popular Mechanics. The danger is that older cars could be damaged by use of E15.

Currently, the Auto Alliance, a trade group of automakers, is studying the effects of E15 in older vehicles. Ethanol has less energy potential than gasoline. Vehicles that aren’t equipped to handle flex fuel, or fuels of varying mixtures of ethanol and gasoline, require adjustment in order to be able to blend fuel.