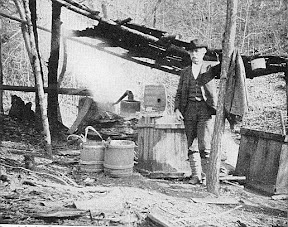 Ethanol, used for fuel, is the same stuff as moonshine. Image from Wikimedia Commons.

Nearly every U.S. president since Jimmy Carter has said something about reducing dependence on foreign oil for fuel. A novel idea was brought up, which was to power cars with ethanol instead of gasoline. Over the last few years, gas suppliers have been mixing gasoline and ethanol, in a solution called E10, or 10 percent ethanol. Currently, the Environmental Protection Agency is considering whether to approve use of E15 for late or older models. Auto firms are urging the EPA to wait until enough evidence has been compiled.

Currently, the Environmental Protection Agency is finding out what it can concerning the launch of E15. E15 means a 15 percent ethanol gas mixture. The Department of Energy is testing the effects of E15 on vehicles that are no older than 10 years, according to Popular Mechanics. However, about 88 percent of all cars in the U.S. in use are 10 years old or older. The Auto Alliance, a consortium of car manufacturers, has urged the EPA not to make any ruling on E15 until Auto Alliance studies have been completed. At least one study, by engineering group Ricardo, Inc., found that E15 has no harmful effects on vehicles older than 10 years.

Ethanol, also known as ethyl alcohol or more colorfully as moonshine, is a distillation of alcohol from grain. It is a flammable and combustible chemical. According to Wikipedia, the drawback to using ethanol is that it has about 34 percent less energy per unit of volume than gasoline. As result, an ethanol-only engine uses 50 percent more fuel than a gasoline engine. With greater compression, ethanol engines can produce more power and become more efficient. However, ethanol as a fuel has not been proven to achieve greater fuel efficiency, or miles per gallon, than gasoline has.

Grain is already being used as a fuel crop. However, the danger with supplanting gas with ethanol is that crops, especially grains, increase in scarcity and therefore cost. Having a cheap abundance of grain crops is what makes civilization itself possible.