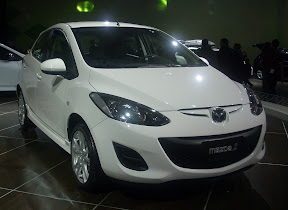 The 2012 Mazda 2 and 2012 Ford Focus use direct injection to get some incredible gas mileage. Image from Wikimedia Commons.

Concern over fuel efficiency is at an all time high, and Ford and Mazda are claiming they’ve produced vehicles with incredible mileage using direct injection. The new Ford Focus and the Mazda 2 both use direct injection to achieve incredibly low fuel consumption. The 2012 Ford Focus is reportedly capable of 40 miles per gallon. The new Mazda 2 is rumored to be capable of a mind boggling 70 mpg. Direct injection is not new, but advances in engine technology make it easier to use to great effect.

Most motors work using what is called the Otto cycle, in which there are four “strokes,” or phases of operation of a piston in two whole rotations. The intake stroke draws fuel and air in, then the mixture is compressed in the second stroke. The ignition stroke ignites the fuel and air with a spark plug, and the exhaust stroke pushes the heated air that remains out through the exhaust manifold. Typically, a mixture of fuel and air is injected through the intake manifold. Direct injection is when fuel is injected directly into the piston during the compression stroke, which ensures correct mixture and compression. It also makes engine operation more powerful and more efficient.

The 2012 Ford Focus and the 2012 Mazda 2 both use direct injection to achieve high fuel efficiency, according to USA Today. The Focus is said to get 40 mpg, and the Mazda 2 is rated at a staggering 70 mpg. Advanced sensor technology can determine the proper compression mixture and use the proper amount of fuel at the right time. Typically, direct injection is used in conjunction with automatically varying valve timing, which the Focus does.The Focus will also be able to accept E85 ethanol fuel.

Gasoline engines can be powerful and fuel efficient, if engineered correctly. This technology is not new. Direct injection has been around for a very long time. For a long time, direct injection was mostly used as a method to boost horsepower.