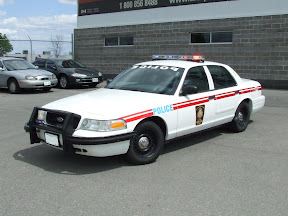 The Ford Crown Victoria will soon be retired, so new police cruiser models are needed. Image from Wikimedia Commons

Major automakers mostly produce vehicles for consumer use, as a daily driver is what a lot of people are looking for when they buy a new car. However, major auto firms also produce a lot of vehicles for fleet applications. Rental cars must be made, as well as vans and trucks for transportation purposes. Among the most legendary fleet vehicle configurations is the police car, or rather, the interceptor. All of the major domestic auto firms make them. Ford and Dodge are both making interceptor models that a lot of people wouldn’t mind driving.

There are two Ford interceptor models that will be released next year, in an effort to replace a long standing favorite among police departments. The Crown Victoria, the rear wheel drive V-8 police cruiser, will no longer be made, so Ford is offering two brand new interceptor models. There will be Ford Explorer and Ford Taurus interceptor models. The Taurus, according to the New York Times, will come with a 365-horsepower turbocharged V-6, along with standard police improvements such as a sturdier frame and extra cooling capacity. The new Explorer is based on the new generation Explorers, and will share a lot of components with the new Taurus.

Dodge and Chevrolet are rolling out new police interceptors as well. Dodge is coming out with the Dodge Pursuit, the police cruiser version of the Dodge Charger. According to the Wall Street Journal, the Pursuit will be a rear wheel drive model of the Charger that will come with a turbo V-6 or a V-8, as well as other police accouterments such as a beefed-up suspension and stability controls. Chevrolet, meanwhile, is coming out with a new Caprice that will only be made for police applications.

Police cars are actually more profitable than other fleet vehicle counterparts, but police cars also have to be made to more demanding specifications. Greater use of electronics is part and parcel to the modern police cruiser, instead of sheer raw power, durability and maneuverability. A cop car also has to be comfortable enough for someone to sit in one for hours on end.