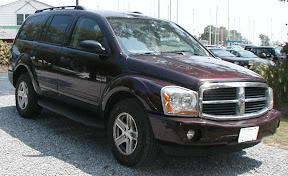 The 2011 Dodge Durango is a lot slimmer than the old one. Image from Wikimedia Commons.

One of the notable absences from the SUV market has been the Dodge Durango. The SUV that was halfway between mid-size and full-size and had full size power was a very popular model, and Dodge promised a redesign. The new Dodge Durango got a little more than just a face lift, as Chrysler is in a bit of a rebuilding phase. The 2011 Durango will be more of a crossover SUV and fill the gap between huge Suburbans and mid-size Explorers. Jeep has some models that are going extinct soon, and Chrysler cannot afford to miss the crossover craze.

The Durango is back

The Dodge Durango was not produced for more than a year, as Chrysler decided to take the three-quarter size SUV back to the drawing board. The SUV that replaced the RamCharger was a popular item when it was being made. The niche it filled was that it offered the cargo space and seating to compete with minivans, as it sat three rows of people, yet wasn’t nearly as cumbersome as larger SUVs such as the Suburban, Tahoe, Excursion, Expedition or the Hummer. Under the hood, it was all Dodge. It was a workhorse equally equipped for ferrying kids between school and soccer and tackling off road duties.

The Dodge Durango has been scaled down. It will be more of a crossover SUV, according to the New York Times. That doesn’t mean that Dodge is skimping on the horsepower, though. The 2011 Durango will come with a stock 290 horsepower 3.6 liter V6, or optional 360 hp 5.7 liter V8. The V8 will have an efficiency system, which shuts down 4 of the 8 cylinders while not needed. Three 2011 Dodge Durangos will be on display at the Dodge Rock N Roll Virginia Beach Half Marathon.

The other two brands besides Chrysler, being Dodge and Jeep, will all be getting new cars soon, based on Fiat models as a result of the Chrysler-Fiat merger. Jeep is shedding the Patriot and the Compass, as those models aren’t selling well. Chrysler would do well to make as big a splash in the crossover market as it can.